Well… we have already had the luxury of feasting our eyes upon the several video part teasers that Ryan Myers has released onto the Lucky Scooters YouTube channel over the course of the last several months, and now the moment has finally arrived and the man, the myth, the Ryan Myers himself has released his full “Welcome to Pro” video part. As I have mentioned many times before, Ryan Myers is and has always been an extremely hard working freestyle scooter rider, who has always done nothing, but try to push himself to the next level with his riding. Freestyle scooter riding is one of those very unique things in life that require a vast majority of your time and effort if you ever want to get anything out of it, and that is precisely what Ryan has done with his riding and it is finally paying dividends.

The dude clearly put a whole lot of blood, sweat, and tears into the filming process of this video, in order to create something that would make us remember his name, and I must say that it definitely worked on me. On top of having plenty of banging freestyle scooter maneuvers featured through out the extent of this video, Ryan also managed to fit in plenty of awesome B roll shots and lifestyle footage, which definitely is a huge contributing factor to the overall quality and entertainment value of this piece.

As far as the actual riding footage that is featured through out this video is concerned, Ryan clearly stepped outside of his comfort zone in order to land some tricks that I think the vast majority of us had no idea he was even capable of. The video definitely kick starts with a jaw dropper as he drops in off of that roof, which was crazy enough to grab my attention and hold onto it for the entire remainder of the video. 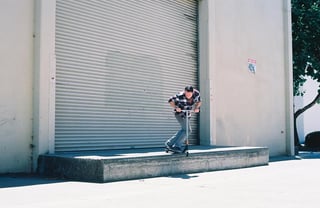 Along with the big time bangers that he has scattered through out this video, Ryan also manages to jam pack this video with plenty of groovy technical lines, as well, which is some of my personal favorite footage in the entire video. There’s nothing better than some extremely technical and stylish street lines, if you ask me, and Ryan has plenty of them in this video. Anyways, overall, it is fairly clear and simple to see that Ryan Myers worked his absolute hardest to produce something substantial with this most recent video release, and he certainly did a very successful job of that, so be sure to check this video out and enjoy witnessing one of Lucky Scooters latest and greatest pro team additions. Also, be sure to stay tuned right here at the Lucky Scooters blog for more rad team rider content and videos just like this one, along with any and all other future Lucky Scooters news, content, and updates.

In need of a new scooter? Shop HERE!