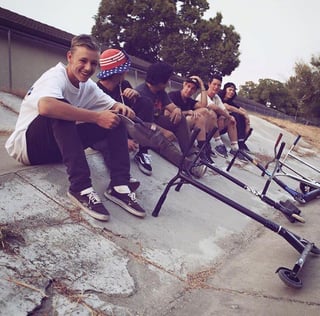 Along with all of the recent buzz surrounding the tenth annual San Diego Competition, there has also been quite a bit of San Diego related videos and content being released online, which is an excellent thing for all of us freestyle scooter fanatics because we get to watch an over abundance of scooter videos. The recent stream of Lucky Scooters videos to be released have been especially enjoyable to watch because they feature so many remarkably talented, young guns that we typically do not get the luxury of seeing too much footage of. One Lucky Scooters video in particular, entitled: “Road Trip to SD10” documents several Lucky Scooters team riders journey, as they make their way all the way from up north in Canada down to beautiful southern California. In total, the video features Lucky Scooters team riders, Patrick Schneider, Brent Ikedah, Jayden Lee, and Alex De Stefano, along with a few 5Starr Scooters team riders, including: Colton Elliot, and Carson Shiefner. However, regardless of who all of these young shredders are sponsored by, they all absolutely kill it in this video, while also managing to ride some pretty awesome looking skate parks and street spots in the process. It also seems though they found the time to visit some awesome tourist attractions during their time on the road, which is ultimately what life is all about anyways, right? All of the boys kill it in this video, and the overall production value just makes all of the tricks and lines performed through out the video that much more enjoyable to watch.

I would say that one of my absolute favorite aspects of this video is seeing such a wide variety of obstacles being ridden by such a diverse group of scooter riders. Everyone was able to bring entirely their own element to the video, which is a large part of why I found it to be so enjoyable to watch. It’s also quite clear based on the footage of these guys that they were really out there pushing both themselves, and each other to shred to their full potential. Although I would have loved to see a little bit more footage from Patrick Schneider just because that dude is so unbelievably talented, the little bit of footage that he did collect through out the process of filming for this video was definitely on point. Alex De Stefano’s massive backside lip slide to tail whip out on that very large handrail towards the end of the video was also quite insane to watch. That trick came out of left field for me, personally. Anyways, this video is stacked with plenty of banging tricks to go around, so give it a watch or two, and enjoy. Also, be sure to stay tuned right here at Lucky Scooters for more superb freestyle scooter content and videos such as this one, along with any and all other future Lucky Scooters related news and updates.