In the aftermath of such a hectic time in the world of freestyle scooter riding, it is often important to take a look back at the events that had just transpired in our beloved sport. The World Championships are a major time for the sport’s progression, but often times, we are so caught up in the heat of the moment that we don’t truly think about and reflect upon all of the remarkable things that went down during that period of time. Lucky Scooters professional team rider, JonMarco Gaydos has been on quite the winning streak leading into the International Scooter Association’s world championships, and with a 5th place finish at worlds, he doesn’t really have too much to complain about. However, the one thing that most scooter fans have failed to acknowledge is the fact that he took home first place in the two United States competitions leading up to the World Championships, and the best part about that is he has the documented footage to prove it. JonMarco just recently released his latest and greatest video, entitled: “The Road To Worlds”, in which he showcases his dominance in the United States competition circuit, while also managing to jam pack a few extra clips in here and there. After seeing his results from the last several competitions that he has participated in, along with the footage in this video, I think it is safe to say that JonMarco Gaydos is definitely one of the best freestyle scooter riders on the planet right now. 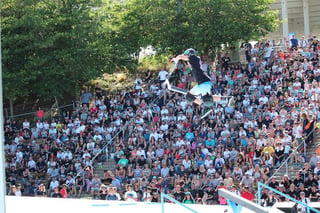 This particular video features footage from both the ISA New Jersey, and the ISA Texas events, and also features some extra clips, as well. As you will clearly see from the footage of JonMarco’s runs, the dude’s tricks are just as unbelievable as they are consistent. He also just so happens to be one of the cleanliest riders that I personally have ever laid eyes on. His uncanny ability to flip and flair just about any obstacle that he comes across certainly makes him a force to be reckoned with, regardless of the terrain. In fact, his big air flair combinations are probably one of the coolest aspects of his riding, in my opinion. That boosted flair double tail whip at The Incline Club competition was nothing short of spectacular. On top of that, the front Bri-flip to late bar spin on the quarter-to-quarter transfer was also one of my favorite clips. Anyways, this video clearly features way too many awesome tricks and lines for all of you not to watch it. I’ve said this before and I will say it again. I cannot wait to see where JonMarco is at with his riding a few years down the line because he definitely has a promising future in this sport. Be sure to check this video out and enjoy. Also, be sure to stay tuned right here at Lucky Scooters for more superb videos just like this one, along with any and all other future freestyle scooter news and content.