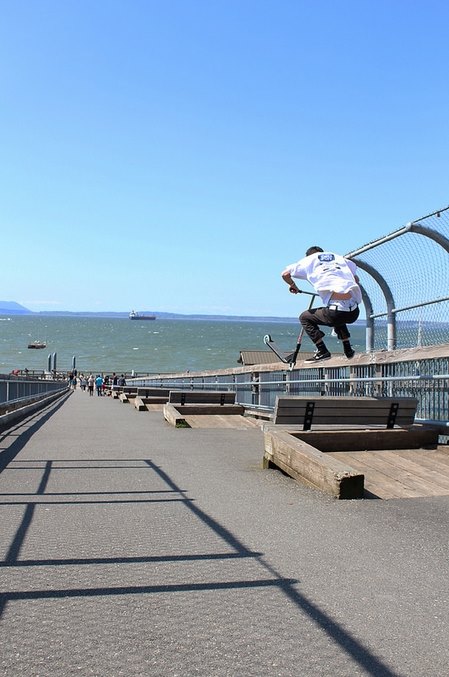 Evan Yamada has played a pivotal role in the creation and growth of Lucky Scooters over the years and has finally returned home as a pro rider for the team! We are all very excited to have him back and can't wait to see him accomplish even more great things for the company! Evan also just so happens to be one of my best friends so I had to snag an interview with him to discuss his return! Check it out!

Blake Bailor: Welcome back Evan! How is it going?

Blake: You just rejoined Lucky Scooters as a pro team rider... How did that happen?

Evan: Yes I did. Not really sure how the process was. I was just talking to the owner of lucky about a job/internship for the summer and the team got brought up. I had recently just left flavor and basically I was happy to join back and they were happy to have me back. It worked out perfectly.

Blake: What were you up to before you joined the team again?

Evan: Well after I originally quit lucky I just scootered for advct. Then I was picked up by flavor and I was on flavor up until my return to lucky.

Blake: Is it weird being back on the team? What made you decide to come back to Lucky?

Evan: No not really. A little weird just because I left and now things are working differently but there are a lot of the same dudes working there from when I left. The team is very similar too with you, james, and jon still on.

Blake: You just dropped a banging Welcome Back edit for 2014... Do you have any other big plans for the rest of the year?

Evan: Thanks man. Yeah it was a lot of fun to film because our college town just got a new local street plaza thing and it’s awesome. I have some plans in the works with lucky. Hopefully releasing more footage and traveling places.

Blake: How long did that ender take in your Welcome back edit?

Evan: it’s really weird because I just thought of that ender fictionally in my head not thinking I could actually do it. I remember Cameron Poe did one in one of his edits and I thought it was so tight. The trick actually only took about 10 tries. I was hella surprised as you can probably tell from my reaction.

Evan: im glad to be back. stay advocated.

If you haven't seen Evan's welcome back video, check it out below:

If you haven't already, be sure to check out Lucky's line of decks!