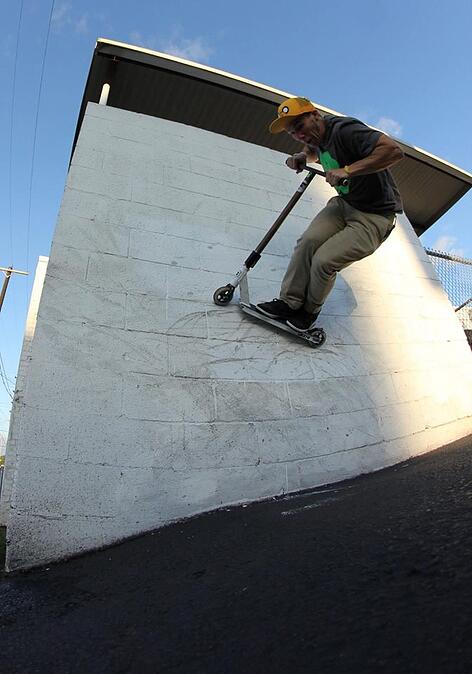 Jake Charters just released his latest and greatest edit for Lucky, so I thought why not deliver an interview along with his new footage? So here it is, the Jake Charters interview! Jake seems to gather footage with ease, as he is able to release new videos fairly often. This latest video is really rad! I feel like Jake is constantly learning new tricks and progressing and it shows in his footage. It is also nice to see a rider film on both street and skatepark obstacles, which not a lot of riders can pull off. That fakie double peg on the kinked quarter-pipe to full-cab in was the sickest thing ever! Definitely check out his edit at the end of the article!

Blake Bailor: What’s up Jake? How have you been?

Blake: That’s what I like to hear! Can we get an introduction into who you are and what you're all about?

Jake: My name’s Jake Charters, I ride for Lucky Scooters and Kryptic Scooters. I’m all about Riding as much as I can while still working and going to school.

Blake:  Awesome! What's up with this latest edit? How long have you been filming for that thing?

Jake: “Fire” has been kind of a fun video for me to film. Been working on this one for a bout 4 months now.

Blake: You seem to have a lot of variation in the obstacles you ride and the tricks that you are capable of doing! What have some of your major influences been?

Jake: My biggest influences have been the pros I grew up watching, just still out there killing it! It’s been guys like Tyler Bonner, Evan Yamada, Yourself, James, Stan, etc. Basically all the NW OG’s.

Blake: Well that’s an ego booster! The Northwest has definitely had some great riders come out of it! What is your history with Lucky? I know you have been a part of the title team for some time now! How did everything come about?

Jake: I’ve been riding for Lucky for about 4 years this Christmas. I got on the original “Sponsored Team” through a video contest, ever since then I worked up to “Flow” then “Am” just about 10 months ago. It’s been great so far, Lucky has really helped push the sport to place’s I never thought I’d see it. I’m excited to see where this sport goes and where it takes me.

Blake: That’s a rad attitude to have! You seem to really be pushing yourself with your riding! What were some of the hardest tricks for you to land in this latest edit?

Jake: I’ve been trying to expand my riding style from just high technicality tricks into more speed, height, and having some more style to bigger tricks.

Blake: That’s sweet! Everything looks better at high speeds, in my opinion. It's awesome to see a rider tackle both skateparks and street spots! Do you have a preference in what you ride?

Jake: I grew up riding park and there are things there you just can’t find in the streets, but, if given the choice between any of the local parks or just going over the river to film in the Portland streets, I wouldn’t have to think twice before I hop in the car and to Portland.

Blake: I’m with you on that one! Clearly, since you just released this video we wont be able to see anything from you for at least a little while! Do you plan on changing your approach or doing anything different with future videos?

Jake: I haven’t even thought about what my next video is going to be, though I am working on a dirt scooter edit, unfortunately that might take a while due to the lack of dirt jumps in my area. Aside from that, I guess we will see what spot my scooter takes me to next.

Blake: That’s the way I like to look at it as well! Thanks for taking the time to do the interview! Any last words dude?

IF YOU HAVEN'T YET, CLICK HERE TO CHECK OUT LUCKY'S NEW DIRT SCOOTER; THE LUCKY WARTHOG!